Battery vs. diesel: Why we need both as we move into a greener future

It’s the debate of the hour: Diesel or battery power? Here’s an honest answer: They’re two vastly different power sources, and there’s a time and place for each.

This is a separate discussion from the renewable energy debate, as the electricity powering a battery engine could very well be sourced from a coal plant instead of a wind farm. Rather, this is a discussion of the various benefits and drawbacks of battery energy and diesel energy — and which is the better choice for various applications.

The emergence of heavy-duty battery power is certainly an exciting time for the green energy movement. Think about Tesla’s record-breaking 100 megawatts (MW) in South Australia, which runs off of wind energy. An impressive feat for battery power, which is why it’s making headlines across the globe.

The problem is that battery power is expensive — about 60% more expensive than a traditional generator, according to Bloomberg. And even at 100 MW —the largest battery system today— it still falls short of South Australia’s energy needs. To make up the difference, they’re installing a 200MW diesel generator for a fraction of the price.

While cost-prohibitive for some applications today, it’s important to remember that battery technology is in its infancy. As it develops it could have a major impact on how our world will be powered in the future.

Diesel is the most efficient combustion engine fuel source, carrying 38 kilowatt hours of energy in every gallon —  27 times that of lithium ion batteries. 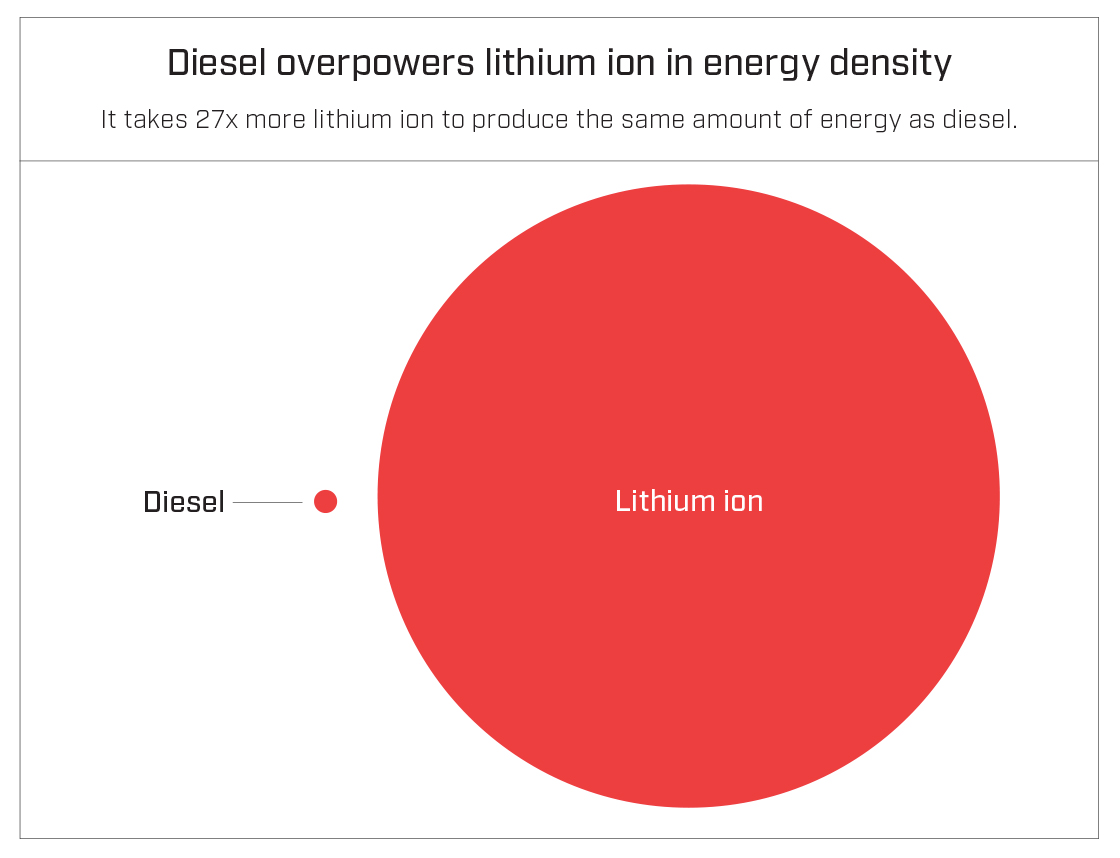 Clean diesel technology is efficient, clean and affordable. Plus, it’s proven — there’s heavy duty equipment in the field today that’s been there for two or three decades.

In the wake of the EPA’s ever-heightening emissions regulations, diesel technology is cleaner than ever. Since the EPA tiered regulations began rolling out in the late 1990s, there’s been a 99% reduction in harmful pollutants, according to the Diesel Technology Forum. In some cases, the exhaust is cleaner than the ambient air going in.

Diesel technology has been around for a while, making it more affordable than alternative power sources. It costs $86 in upgrades to remove one pound of potential NOx emissions, whereas it costs $165 in battery charging infrastructure to remove the same amount.

And diesel can save money from reduced downtime, as you can immediately refuel your unit rather than waiting for it to recharge.

The fact of the matter is that diesel technology is just further along than battery technology at this point in time. Battery power can and will catch up, but diesel is necessary now and in the future for its proven reliability, mobility and efficiency.

A big obstacle for electric transportation vehicles is the lack of charging infrastructure in remote parts of the country. One major line of all-electric transit buses ran into this roadblock. Even though their buses were equipped with rooftop solar panels, nighttime and long-range routes proved to be a challenge.
When the bus company came to CK Power with this problem, we suggested a hybrid electric-diesel solution.

Along with Girtz Industries, we custom-engineered a line of compact, operator-friendly charging containers that relied on a Tier 4 diesel generator to provide electric charge for the buses. These charging containers provided clean, reliable diesel energy to supplement the bus line’s solar and electric power.

Smart hybrid solutions like this one are essential as we seek to power our industries with clean energy sources. There’s a time and place for both technologies, so when it comes to deciding which is better for your application, it’s not really a matter of either / or. You need to take stock of your preferences, the needs of your application and your budget.

In an application where you’re going to be far away from a power grid for extended periods of time, diesel power makes the most sense. If, however, you’re operating lots of equipment in one area close to the grid, battery might make the most sense. For instance, in a port, you might use battery-powered equipment to save the time and expense of storing and maintaining diesel fuel.

We need both technologies: Increasing the diversity of our power sources is a priority moving forward. As battery technology improves, costs will drop and viability will increase. Even still, we’ll need clean diesel to cover the areas when variable renewable energy sources peak and valley.

To learn more about how diesel energy stacks up in the modern world, read our guide comparing clean diesel to battery, explaining how manufacturers have responded to diesel emissions regulations, making diesel one of the cleanest and most inexpensive energy options available today. Download the guide.

Article
Video: The value of an impartial spec review for your backup power system? Invaluable
Article
Video: Service and support from cradle to grave
Case study
What lifetime support means to us
Case study
No-downtime power redundancy for a major telecom company

The truth about diesel: Why diesel power is vital to the green energy movement