Wet stacking and how to avoid it

Dive deeper
Get the no-nonsense guide to NFPA 110 compliance

Most standby generator systems up to five megawatts use reciprocating internal combustion engine as the power source to drive the generator that produces the electrical power. The engines of choice are diesel, natural gas or LPG fueled. A large percentage of standby power systems use diesel engines. Diesel is a convenient, independent fuel source and the compression ignition systems of diesel Tier 4 engines have a much higher thermal efficiency than the spark ignition system used by gas engines. However, one factor to be considered when selecting a diesel power source is the potential for “wet stacking.”

The National Fire Protection Association (NFPA), in the 1996 edition of their NFPA 110 Code for Emergency and Standby Power Systems, refers to wet stacking as a field term indicating the presence of unburned fuel or carbon, or both, in the exhaust system. The later 1999 edition suggests a more quantitative method for determining the presence of wet stacking, by measuring the exhaust gas temperature (which is explained later in this information sheet). This post discusses the causes of wet stacking, its effect on the engine, why it should be avoided and methods for addressing the problem of wet stacking.

The designer of a Tier 4 generator system must take into account the potential for wet stacking when determining equipment for the system, load calculations and maintenance and service programs. 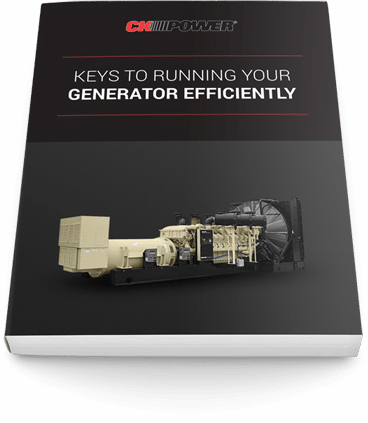 Learn the keys to running your generator efficiently

Like all internal combustion engines, to operate at maximum efficiency, a diesel engine has to have exactly the right air-to-fuel ratio and be able to sustain its designed operational temperature for a complete burn of fuel. When a diesel engine is operated on light loads, it will not attain its correct operating temperature.

When the diesel engine runs below its designed operating temperature for extended periods, unburned fuel is exhausted and noticed as wetness in the exhaust system, hence the phrase “wet stacking.”

The effects of wet stacking

When unburned fuel is exhausted from the combustion chamber, it starts to build up in the exhaust side of the engine, resulting in fouled injectors and a buildup of carbon on the exhaust valves, turbo charger and exhaust.

Permanent damage will not be incurred over short periods, but over longer periods deposits will scar and erode key engine surfaces.

Also, when engines run below the designed operational temperature, the piston rings do not expand sufficiently to adequately seal the space between the pistons and the cylinder walls. This results in unburned fuel and gasses escaping into the oil pan and diluting the lubricating properties of the oil, leading to premature engine wear.

Why avoiding wet stacking is essential

In addition to the adverse engine effect, the designer and user of a system have to consider:

Wet stacking is a recognized condition with organizations that write codes for standby generator set systems, such as the NFPA, which has issued several guidelines for controlling the effects.

The NFPA guidelines in Level 1 and 2 applications require exercising the unit, at least monthly, for 30 minutes under either of two methods: (NFPA 110 8.4.2)

The Joint Commission on Accreditation of Health Care Organizations (JCAHO), the organization that accredits health care institutions, has taken this testing to a level beyond the NFPA. They require testing of 12 times per year with testing intervals between 20-40 days. Testing generators for at least 30 minutes under a dynamic load of 30 percent or greater of the nameplate rating.

Systems that do not meet the 30 percent load capacity have three options:

JCAHO also recommends that all automatic transfer switches (ATS) are tested 12 times per year at 20 and 40-day intervals. The provider of the power system through planned maintenance programs can undertake load testing when testing the ATS.

Solutions to the problem of wet stacking

The most straightforward solution is to always run the generator set with an electrical load that reaches the designed operational temperature of the diesel, or approximately 75 percent of full load. Built-up fuel deposits and carbon can be removed by running the diesel engine at the required operational temperature for several hours if wet stacking has not yet reached the level where carbon buildup can only be removed by a major engine overhaul.

The following load bank solutions should prevent a reoccurrence of wet stacking:

Keys to running your generator efficiently